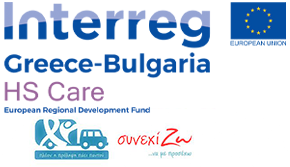 1. The Municipality of Strumyani is located in Southwest Bulgaria, and constitutes part of the Prefecture of Blagoevgrad. The ground is a highly interesting mosaic of various types of low, medium and mountainous valleys. About 3/4 of the municipality is covered by mount Maleshevska ridges with its highest peak, Golak, at 1453 meters, while along it lies the river Struma.

The village of Strumyani was initially used as a train station on the railway between Sofja and Kulata with the name Gara Ograzhden (Ograzhden station). In 1970, it was merged with the village of Mikrevo to create Strumyani, but the two villages were later separated. However, Strumyani kept its current name. Its name means “People of Struma”, since the Struma River flows nearby.

The first records of the town of Topolovgrad come from the 1492/1493 Ottoman tax list, which mentions the town by its old name Kavakli.

3.  The Association of Cancer Patients and Friends of the Prefecture of Evros “Sinehizo – ΣυνεχίΖΩ” was founded in 2007 by people who faced directly or indirectly cancer, or worked against it (nurses, doctors etc). The association is a member of the Hellenic Cancer Federation and the European Cancer Patient Coalition.

The association operates in the whole region of the Prefecture of Evros, with psychological support teams, with specialized psychologists, problem management seminars regarding the illness, as well as volunteer education.

The association organizes public educational meetings, regarding the most common types of cancer, with fast diagnosis being its aim.

It has made quite a few appearances in the local media in cooperation with various associations, bodies of local government, the Democritus University of Thrace etc, while offering its members recreational activities (trips, music nights, concerts, theatrical performances, dance groups, crafting and more)!

In 2008, Stavros Niarchos Foundation trusted the Association and appointed it as the body implementing the construction, following its donation, of the Stavros Niarchos Guesthouse. The guesthouse offers home to hospitalized patients and their companions, and it has been in the ownership of the hospital of Alexandroupolis since 2009.

In 2014, after a kind donation, the association proceeded with a thorough renovation of the One Day Clinic of the Alexandroupolis hospital, offering the patients and their companions equipment and a different treatment environment that respects them, and an ergonomic workplace for the staff.

Its crucial intervention and the ongoing efforts towards all the associated bodies, as well as the perfect relationship towards the Stavros Niarchos Foundation, has helped in order to raise the funds for the new state-of-the-art Linear Accelerator in the Department of Radiation Therapy, which cost 2 million euros and, since it was installed in the Alexandroupolis Hospital, has changed the health map of the country.